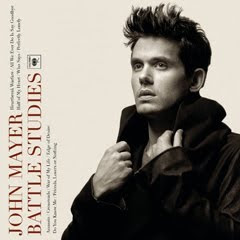 On the high-contrast black-and-white cover photo of John Mayer's latest studio album, the singer, songwriter and guitarist's hands are pulling at the collar of a thick winter coat. It seems as though he's trying to brace against the onset of frosty conditions; the overall effect is fairly Morrissey-esque. That's no coincidence -- in themes and tone, Mayer shows a lot in common with the great romantic fatalist of '80s Brit pop: He's "Perfectly Lonely" in the song with that title, and he opens the collection with "Heartbreak Warfare," about the ways we hurt the ones we ostensibly love.Musically he's exploring the moody territory of acts such as Coldplay and Snow Patrol; at the same time, he displays his debt to guitar heroes including David Gilmour, Eric Clapton and George Harrison.For the most part, he expresses himself more eloquently through his guitar than his lyrics in the 10 of 11 songs he wrote. (Intriguingly, his version of Robert Johnson's blues classic "Crossroads" puts Clapton's signature blues-rock riff through effects processing that leaves it sounding like a keyboard.)Why he decided to ape Dave Mathews in "Who Says," his ode to the benefits of escapism during down times, is anybody's guess, but it's set to a lovely country-rock shuffle. "Assassin" stretches the metaphor of a stealth killer too far, while "War of My Life" sets foot on U2's turf -- without the soul-deep passion of the Irish rockers. That deficit leaves many of the songs strangely uninvolving, despite the beauty of his melodies and empathetic production he and drummer Steve Jordan have given them.The lesson of "Battle Studies"? If you're heading to war or in to love, better to take no prisoners.--
Randy Lewis
Video for Mayers latest 'Heartbreak Warfare'

Reba’s “Consider Me Gone” celebrates its third consecutive week atop both the Billboard Country Songs Chart and the USA Today/Country Aircheck Chart (powered by Mediabase) this week, making “Consider Me Gone” the biggest chart hit of the superstar’s illustrious career.“Consider Me Gone” also becomes the longest-running #1 hit for a female Country artist since Taylor Swift’s “Our Song” logged a multi-week stint at #1 in 2007.With #1 songs now spanning four decades (80s, 90s, 00s, 10s), Reba’s run of #1 hits now extends to 26 years [her first #1 came in January 1983 with “Can’t Even Get The Blues”]. The second single from Reba’s #1-selling album KEEP ON LOVING YOU, is also the longest-running single of the superstar’s career.“I can’t think of a better way to start the new year and a new decade! I would like to thank everyone at Country Radio from the bottom of my heart”, says Reba of her latest milestone.
The video for 'Consider Me Gone'
at January 16, 2010