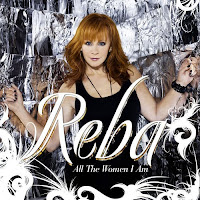 I've been a fan of this lady since I was a little kid. In the mid 80's Reba's career began to finally take off with the release of her doormat hit 'Whoever's In New England'. I remember my dad brought home the cassette & from then I was hooked. I remember how fondly my dad spoke of this wrangler wearing country girl, to the point I almost felt jealous for mom. That was ok because Kenny Rogers was her man. LOL Aww the 80's...
Tuesday Reba released her album called 'All The Women I Am'. After all these years this Oklahoma girl has been keeping up with the new younger generation with her steady stream of top 10 hits, which is no easy feat for an artist at her age. Sad but true. Her latest single 'Turn On The Radio' became her 63rd career top 10. Seems to be no stopping the queen of country & you can catch lots of her this week on TV promoting her album. You also might see her win another CMA award on Wednesday for best female vocalist. Pick up this latest disk.