This time last year a struggling Fort Worth musician took the advice of his mom & drove 13 hours to audition for a shot at stardom. Denver Colorado held it's auditions for the Fox hit TV show American Idol. Just like thousands of other hopefuls, Casey James sang for an opportunity to earn a golden ticket to fight it out in the Hollywood rounds months later. That's just what happened when this small town guy began to show the judges & all of America what he could do.

Week after week James would advance to the next round as all of us locals cheered him on from our living rooms. Casey was not your run of the mill Idol contestant as he stayed true to his blues rock influences & didn't back down from that. Bringing something new to the show was just what Idol fans wanted as James jammed his way into the top 10. Making it this far meant he would be able to hit the road the following summer in the "Idols Live" tour.
Most of my FB friends status updates on Tuesday night would be Casey related. Many past & present Millsap alums were stoked about the possibility of our small town guy actually making it big in the music industry. The local ties now had folks who wouldn't normally watch Idol doing that & even calling/texting in votes. Toward the end of the season watch party's were in full swing as the big prize was in arms reach for James. The possibility of a hometown tour had the whole community buzzing & we all hoped us along with Casey's die hard fans could push him into the top 3. Having a few close calls, it was hard to tell if he could make.... but he did.... 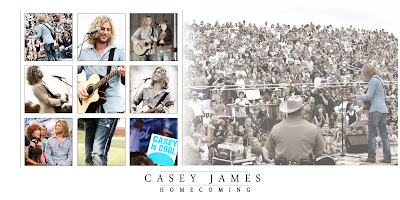 A fast & furious hometown visit was in the works & Millsap High had hours to put together a mini concert to congratulate their most famous graduate. I was curious to see how many would show up at Bulldog Stadium to see Casey & AI camera crews do their thing. This quickly orchestrated event brought fans from as far as Tennessee & Florida. This more than overwhelmed Idol finalist stepped out of his stretch limo to see the "standing room only" crowd cheering his entrance.
It was a blast to be able to cover this event for the community. For Casey's two day tour I was allowed to get great access & photograph many of his stops. After it was said & done I had hundreds of images & I wanted to share them with everyone. A few of us got together & created a page where we could post all the photos. Appropriately enough, we named the page "Casey James Homecoming". This was a good way for all the locals to enjoy & download the photos of themselves from the site. It wasn't long before the page was getting noticed & "liked" from Casey fans from all over the world. The international fans like getting an inside look from a hometown perspective. The administrators of the page also include Cousin Sara Poynter who added a personal touch to the page by uploading many of her own photos taken during the homecoming. Even though the page is named "homecoming" it was evident that the almost 3 thousand fans who have joined, look for updates & want to know what's new in Casey's career. We have collectively posted videos, articles & blogs that keep everyone informed on the latest . We didn't plan on this type of page, but it just sorta happened & we're glad to help out in any way we can by keeping his name out there.
What's next...
The AI tour has made it's way around North America & in true AI fashion they have crammed many tour dates into a few short months. Casey has been on a dead run since February when the show started. He will once again be performing in Texas this week but on another level. Going from 30+ people at Keys Lounge to thousands at the AAC. If you haven't purchased your AI concert tickets for this Monday night, then you can at TravelZoo.com. 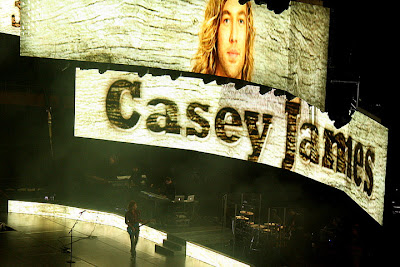 Photo courtesy of Danna Nicholson.
A group of us will be attending the show Monday & of course I'll have my camera in hand. You can find us in the nosebleed section but maybe with a 300mm zoom lens I will hopefully get a few images to add to the CJH page. We'll see... If not I will hopefully find some good images from fans who paid the big bucks for a front row seats. 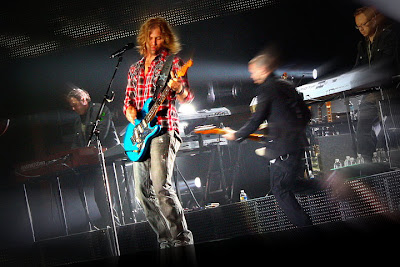 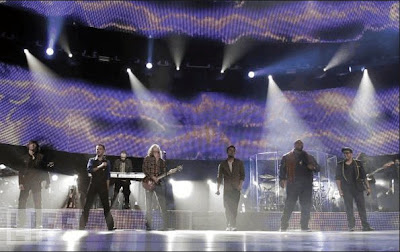 Photo courtesy of LIFE
What about a record deal?
Soon after the shows finale, Casey met with record executives from Sony music. No final deal has been officially announced at this time but internet chatter is that something will be released later this week. Those things take lots of time & the longer the better so they can find the best material possible for his debut album. We just hope the higher ups will let Casey stay true to his sound & record music his way.
Through all of this craziness & my association with CJH site, I have met so many great people. Months after the show ended & the hype died down, Casey's fan base has continued to grow & are still some of the most dedicated out there. Who knows how things will work out with a major record label/touring on his own. American Idol has given this once struggling musician a shot to win over an industry of hits & misses. One things for sure, the fans he's gained along the way will be there whatever happens.
A few Casey related sites worth checking out:
at August 06, 2010