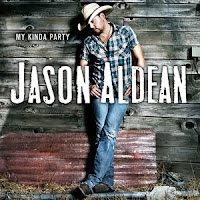 The lead-off single from the album is the title track written and originally recorded by fellow Georgia-native Brantley Gilbert. “My Kinda Party” is a song that melds the country & roll swagger of “Hicktown” with the charm of “Big Green Tractor.” Some of those people I mentioned above may have derided the song as ‘yet another obnoxious redneck party anthem’ but not only does it play well to the audience that is buying Aldean’s records, it is downright many of these people’s life. It appeals to the young male record buying audience who think Aldean is cool while the girls buy the record because they think he’s hot. The second Brantley Gilbert song on this album is “Dirt Road Anthem.” Written and originally performed by Gilbert and popular southern country “rapper” Colt Ford, “Dirt Road Anthem” has spoken (rapped) verses and sung choruses. Aldean shows off an ability to flow the lyrics in a melodic manner and while this tune isn’t likely to be a hit at country radio, it will be a highlight of the “My Kinda Party” tour (if it isn’t already). It also plays well to Jason’s willingness to take chances with his music and not just ‘play it safe’ and release the same two or three songs and albums over and over again. CLICK HERE to read the entire article.
Check our Jason & Kelly Clarkson from the CMA awards singing one of his tracks off the new record.