Throwback Thursday: A Look Back

HAPPY NEW YEAR! It's hard to believe that it's 2015....where does time go? I remember so vividly when the world was so scared of Y2K (year 2000) and how our computer systems would all fail, there'd be no water, electricity etc.  Cari and I had just our little boy Chase about two months earlier and were already nervous as it was. Just like had been advised, we stocked up on water and some canned goods just in case. In case of what? I'm not really quite sure, but we were semi ready.

Cari and I snuggled up with our newborn baby in our tiny trailer as the "ball dropped". Yep, still electricity, still running water....we all collapsed into our beds for a peaceful nights rest. We'd awake the next morning in the year 2000 and realize none of those crazy Y2K dilemmas occurred.

Here's a few facts about Y2K: 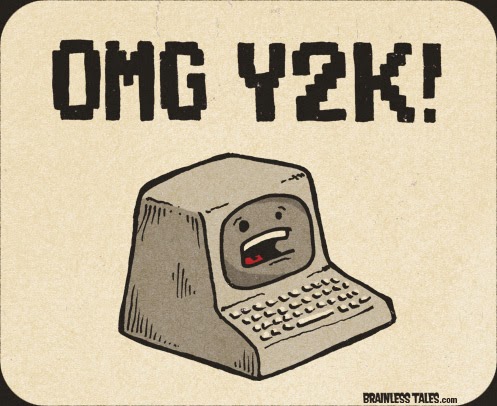 2000 was the year that digital music broke. Personal computers became personal jukeboxes and music-sharing networks like Napster, and Gnutella became the best place to hang out and hear music. The format is here to stay, but the future of sharing free music over the Internet has yet to be decided by its major players: artists, record companies, fans, and lawyers.
The Sixth Sense cleans up at the People's Choice Awards, winning both Favorite Motion Picture and Favorite Dramatic Motion Picture. Bruce Willis takes home the Best Actor in a Drama Award. Big Daddy earns the Favorite Comedy award, and its star, Adam Sandler, wins the top acting prize in a comedy. NBC prevails in the television awards, winning both drama and comedy nods for ER and Friends,respectively.
In the biggest merger in the country's history, America Online agrees to buy Time Warner, the nation's largest traditional media company, for $165 billion. The mega-deal reflects the growing dominance of the Internet in areas including publishing, music, film, and broadcasting. It also serves to validate the Internet, proving that the Web is likely here to stay and somewhat justifying the value of Internet companies that have yet to turn a profit but are worth billions on paper.
This is hardly the first year that Japanese cartoons, or anime, has been huge in America. But this list would not be complete without it. "Pokemon" and "Dragonball" were two of the most searched words on the Internet. Anime has all the requirements of a pop trend: it looks great, it's controversial, and it's got lots and lots of merchandise for kids and parents to buy.
Michael J. Fox announces he's leaving Spin City at the end of the 1999–2000 television season to lobby on behalf of Parkinson's disease, with which he was diagnosed in 1991. In February,  Charlie Sheen signs on to replace Michael J. Fox in ABC's hit Spin City. He'll earn $2.75 million a season, which translates into $125,000 per episode.

Brad Pitt and Jennifer Aniston marry in an ultra-private, ultra-swank Malibu ceremony. The A-list couple reportedly spent $75,000 on flowers alone.
Ellen DeGeneres and Anne Heche announce their breakup. “Unfortunately, we have decided to end our relationship. It is an amicable parting, and we greatly value the 3 1/2 years we have spent together,” they said in a joint statement. The same day, Heche was hospitalized after wandering disoriented to a southern Fresno County, California, house. No word on what prompted the behavior.
On December 13, 2000, 36 days after the election and the flurry of lawsuits, counter suits, appeals, and bitter partisan bickering that followed, Texas governor George W. Bush became the president-elect, prevailing over Vice President Al Gore in the electoral college by the narrowest of margins, 271–267. Gore dominated the popular vote, however, winning 50,158,094 votes over Bush's 49,820,518.
One day after the divided U.S. Supreme Court handed down its monumental 5–4 decision that essentially cleared the path for Bush to claim the White House, Gore conceded the presidency in a speech marked by its integrity. An hour later, Bush spoke to the nation in an equally dignified address.
Warner Bros. announces it has cast 11-year-old British actor Daniel Radcliffe to play Harry Potter in the upcoming Harry Potter and the Sorceror's Stone. The film is due out in the Fall of 2001.
People magazine names Brad Pitt the “Sexiest Man Alive.” It's the second time the heartthrob has earned the honor. The first time was in 1995.
The last episode of the Emmy-winning The Chris Rock Show airs on HBO. The cable outlet offered no explanation for cancelling the show.Robert Downey Jr. is arrested in Palm Springs, Calif., on charges of possession of cocaine and methamphetamine. Police responded to an anonymous caller who claimed there were drugs and guns in a room at the Merv Griffin Resort. No weapons were found. Downey had been out of prison for three months following a 14–month incarceration for a probation violation stemming from a series of drug-related arrests in 1996. He's scheduled to appear in court on Dec. 27.