This past weekend there was a big concert event in Dallas. The New Cowboys Stadium opened it's doors for the first time to a sold out crowd of anxious country music fans. The show featured many of the top acts in the industry including headliners Reba McEntire & George Strait. I wasn't able to make the event because of a work obligations but I've been catching up by watching concert highlights on YouTube. I joked with my cousin who had seats on the 50 yard line floor. I explained to her that I was watching all the footage on the net.....for FREE. No long lines, no traffic & without spending hundreds of dollars. It would have been a fun experience to see the show though. All the fuss made me want to dig up some images from the last time Reba was in town. 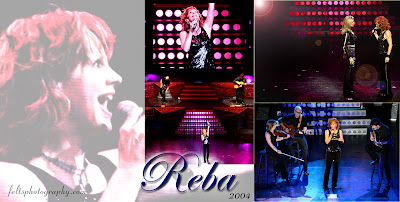 This concert was on September 11, 2004 in Dallas. Cari & I were center stage balcony & had a pretty good view. One of the biggest things about a concert for me is trying to get great photos. Gee, I wonder why that is??? While entering the event the ticket lady noticed the large camera & my 200mm zoom lens. She immediately said "you can't bring cameras in here". Instead of acting mad I gave her the saddest puppy dog look and said "oh pleeeease" For some reason a man to the side motioned for her to go ahead and let me in.....not sure why. Maybe it was the puddle of tears I was standing in. ( joke) I would have been ticked had she made me take it back out to the car. I do understand that the bigger the camera the better the photos, and some people could use great photos to make money off the singers. Oh BTW, if you want to purchase one call 817-...... lol I was glad to be able to get a few good shots from the show.
Here is a video of Reba closing the show with Fancy. 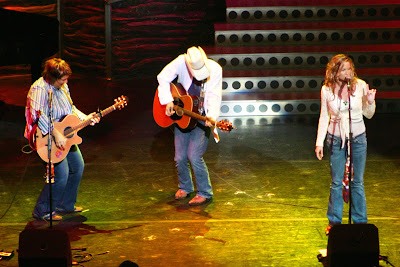 The opening act that night was a VERY unknown trio named Sugarland. They played a completely acoustic set of 6 or 7 songs. The stripped down sound was great and the lead singers voice was unforgettable. They let the crowd know that their first record was coming out in just a few months. After hearing them that night I was sure to purchase it the day it came out, and I did. Sugarland has gone on to become a very successful group & now duo in the business. I think it was cool to see them before they hit it big.
at June 08, 2009