I absolutely can't believe the weather we're having here in Texas. Usually we will have a couple of good ice days in this area, but never 4 consecutive days in a row of no school.  Yes, FOUR consecutive days....

I remember when I worked in grocery & as soon as the weather man said ice or snow, people would flood the aisles & clear off all the merchandise. We would always say "geez people, it's not like were gonna be stranded for days."  Usually by the very next day the temps rise & the ice melts enough for us to get out.  So on Monday evening where were we....at Wal-Mart stocking up on needed items. Guilty!  I kept thinking about how dumb it was to make a last minute store run but man I'm glad we did.  Cari picked up ingredients for tacos, pot pie & cookies...smart lady.

Yesterday it was looking as if roads were starting to thaw out somewhat to at least venture out into town if needed.  But this morning just as the trusty channel 5 forecasters said, several inches of snow fell & added another layer of ice to the situation.  Such bad timing on this. Because the Super Bowl is finally here in Dallas, (cough) excuse me ARLINGTON, our history making weather conditions are definitely throwing a monkey wrench into the festivities.  All the celebrities, the parties, the promotions & the money....dang. I sure hate that for all the local businesses depending on the revenue.  You know business owners have been working hard & putting tons of dollars into getting things ready for this entire week of what would have been record sales.  Yes everyone will still be here for the actual game on Sunday but all the days leading up to it were supposed to be big too. Bummer.

Since I got my iPod touch I'm really liking the photo & video capability it has. I've even found really great video editing apps. that enables me to add titles, transitions & splice together multiple short clips into one. Here's one from some of our snow playtime.  I'm just getting use to the functions so it's nothing fancy.

This morning I saw this image on OMG-facts.com. This site is full of random strange facts. Check out the site.  I posted the photo & article below. 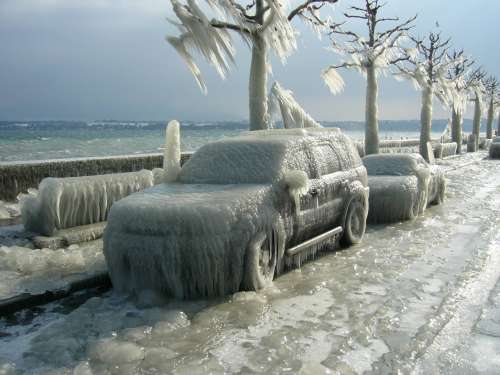 A car in New York City was completely frozen in place.

On Tuesday, 32-year-old New Yorker Peter Helfer returned to his Audi A3 station wagon to find that it had become a giant icicle! In a major case of bad luck, Helfer had parked directly over a busted water line. The combination of subfreezing temperatures and passing traffic splashing water onto his vehicle for 48 hours had completely encased it in a sheet of ice! Having to miss work, Helfer struggled to free his car for about 7 hours, accidentally smashing his rear window in the process. Thankfully, city workers sent to repair the broken pipe were able to aid him with the use of a hammer, chisel, and a blowtorch!
at February 04, 2011