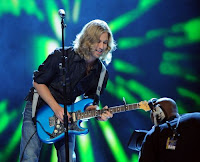 From the Weatherford Democrat:

Students were allowed to pay $1.00 to wear caps at school on Friday to raise money for American Idol contestant Casey James’s mom. The idea came after students and staff read a newspaper article about the Millsap graduate’s mom needing money to travel to Hollywood to watch her son perform.

The idea of paying to break the school’s dress code for one day soon grew into more than just wearing caps. High school girls convinced administrators that they could raise even more money, if in addition to caps, students were able to pay $1.00 to be able to wear holes in their jeans. The boys then persuaded principals to add the option of donating to the fundraiser if they could to come to school without shaving.

According to a release from MHS Principal Darla Henry, the dress code took a back seat to helping a former student and his family.

“Visitors to Millsap High School may have gotten the wrong idea if they visited campus on Friday,” Henry wrote.

“The high school’s normally conservative dress code was relaxed to allow Millsap students help one of their own.”

The entire school district and community has been on “Casey Watch” for several weeks and has been visited by newspapers and television news all wanting a glimpse into the early life of the Idol contestant.”