On Tuesday night local Idol favorite Casey James will take the stage along with the other 11 top vote getters. This week the real competition gets in full swing as both boys & girls compete together for the first time live.
The internet was a buzz a couple of days ago when it was reported the Casey was spotted in a doctors office & later confirmed by family that he in fact was sick with the flu. Prayers & well wishes flooded the family & friends Facebook pages for a fast recovery for his Tuesday night performance. I remember in seasons past when a flu bug got several contestants & it had everyone wearing surgical masks. I'm sure the others are keeping their distance from Casey this week. The word is that he is now feeling better & will be good by tomorrow.
I guess you've arrived when major national "trash" magazine like Star & The Enquirer find you interesting enough to put on the cover. Shockingly enough the National Enquirer did an honest interview with Casey ex-wife who painted him in a good light. I'm sure they intended on digging up "grit" on the AI finalist to exploit his character but probably ended up giving the girls more reason to vote for him. Many ex-spouses would jump at the chance to trash you & be able to dish details about how they were wronged during the relationship. It seem they two are still on good terms & basically says he chose his career over his marriage. It seems that choice paid off as all us small town Millsap folk are seeing Casey go from virtually unknown to a celebrity in a matter of weeks. A goal James has been driving toward for over 10 years. (to be a famous blues musician) Each of these 12 contestants must be on cloud 9 who have now been busy filming Ford commercials, doing Rolling Stone interviews, photo shoots as well as TV cameras glued on them. I certainly hope the show has PR reps. guiding these young people on how to deal with their new found stardom. What to say what not to say.
I still think we will see Casey pickin' his way to the end along with fellow female favorite Crystal Bowersox. Remember to tune in Tuesday & vote for Casey!
(the guy my 4 year old wants to marry) uggh.... 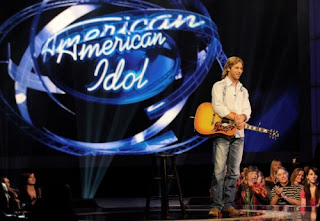