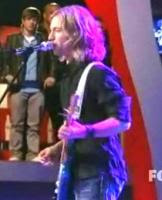 Yesterday afternoon I pulled up FaceBook to see the American Idol schedule had changed. Casey's family got word that due to an illness of female contestant Crystal Bowersox they swapped out days. Sadly, the sudden change meant mom & brother couldn't attend the day early performance as planned.
After last nights show we saw some big improvements on the guys side. However, the judges reviews of Casey's rendition of Gavin DeGraw's "I don't wanna be" were split. Randy & Ellen liked it, then it was Cougar Kara's turn. She may be doing a little damage control when she actually criticized him saying, "you took two steps back with that performance." She also added that his letting loose on the electric guitar took away from the fact that this is a singing competition. Point taken, but minutes later the group told the dancer of the bunch Todrick Hall, "show us your dancing, that's part of you". I think it was good to show the audience that Casey James can really jam & that's what you get if you see him perform. I hope all that crush-eye-candy talk is finally over so the focus can be on the talent. We will see if the girls will step up their game from last week as they hit the stage tonight. Hopefully Crystal will be back to show all those diamond divas how to do it.
Check out these link to for a complete rundown on last nights show & more.
Yahoo Music Blog
Family Made Casey T-shirts
at March 03, 2010