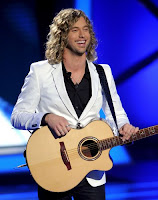 It was a close call for fellow Millsap graduate Casey James this week on AI when he was in the bottom three. James has always been considered a front runner in this years competition so maybe everyone assumed he was safe & he didn't need excessive voting. Just two weeks ago Mike had the lowest number of votes but was spared by the judges save. Now his loyal fans kicked it into high gear & he hasn't even been in the bottom 3 again. Season 3 winner Fantasia was also in the bottom 3 then came back, so this really doesn't mean much. I guess it's time all us locals (who care) to vote & keep Casey in the game. Help put Cool on the map!
In a way I kinda see the judges points that he could change it up, but there's no doubt he is a seasoned performer & can rock. Any other artist gets a year or more to come up with different sounds & styles for their record. In one weeks time, these young people are expected to come up with different sounds & performances. Doesn't seem fair to be so harsh about sounding the same from the previous week.
From what I've heard, Casey has been very sick this week, & many week throughout his stay in Hollywood. Despite this fact it seems to me that he has done a great job of hiding it & still giving the audience a great performance. Even if Casey isn't pop enough for AI fans to make him the winner, this platform is a great way for him to expose his talent to major record executives that will take notice & make great offers. Good examples are Chris Daughtry & Jennifer Hudson who both fell short of winning the top spot but have done well in the business. The more weeks he stays in the competition the more in demand he will be which means better offers.
at April 22, 2010