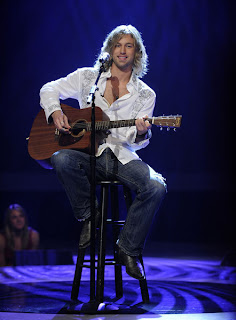 After seeing all 24 Idols do their thang this week, I have to say it's looking pretty good for our local guy Casey. All of us fellow Millsap grads. were on the edge of our seats Wednesday night to see how he would do. He didn't disappoint us or the judges with his cover of Brian Adams hit 'Heaven'. In fact if memory serves correctly, he is the only guy that got praise from all the judges even despite his distraction from Kara & Randy in the beginning. It seems that other top favorite Andrew 'Gokey' Garcia will be his only real competition along with female standout Crystal Bowersox. I really don't think I'm being partial just because he's local, because the buzz all over is that James has what it takes to make it far. It was neat to see his mom & brother B.C. (band member) in the audience who traveled to L.A. support Casey. His mom Debbie was quoted in the Democrat saying how she had traveled many miles to see her boys play & this was one "gig" she wouldn't miss. So many of the kids that make it to the show have great voices but don't have the stage presence. Then there are those like Casey, when it's obvious that they know the ropes & have been doing it for years. It's awesome to see it's all paying off now.
My 10 year old asked me as he pressed re-dial "dad, what does Casey get for all these 'points' we're giving him" I laugh......to be rich & famous. I've seen a few of my facebook friends post photos of the signs in Cool & Millsap congratulating him on the succcess. While in Sapcity yesterday I had to get my own.

I'm sure some of our blog readers couldn't care less about American Idol, or think it's a bit ridiculous for a 32 year old man to give updates. Under normal circumstances I couldn't agree more with that. However It's not everyday an average dude from Millsap gets this kind of attention by 30+ million viewers. So..... we will continue to support Casey w/ blog updates news & whatever it takes to help push him further.
Related Links:
Mineral Wells Index Article
American Idol Official Page
Seattle Times Article
Casey On iTunes
Local Idol
at February 26, 2010