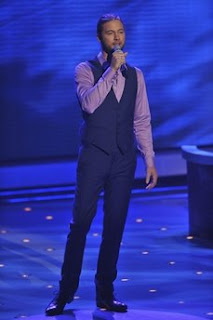 Cool, Texas, that is. The tiny ranching and farming community where James grew up is rallying around the musician who is one of the last four contestants left in this season's show.

A marquee outside the Cool Community Center reads "Am. Idol Casey James!" At his former high school in nearby Millsap, a banner proclaiming "MHS (hearts) Casey James" hangs over the main entrance, where the doors are covered with dozens of signs: "Vote Casey — He's the Best" and "Casey James Rocks!"

A Millsap High teacher has made a shrine to James in her classroom, featuring a candle, his senior yearbook and a poster covered with his photos. Last week, about 200 people watched "American Idol" on big-screen televisions at the school, which has about 265 students.

"It's a really big thing at school and all over town because Millsap has never had anyone famous," said Jerra Lewis, who taught James in her theater class before he graduated in 2000.

James has been a fan favorite since his Denver audition for the Fox show's ninth season, when some of the judges asked the 27-year-old to remove his shirt and take down his ponytail — revealing wavy, dirty-blond locks.

Hollywood is a long way from Cool, a 200-resident town about 40 miles west of Fort Worth. But while playing the guitar and singing on the front porch or performing with his mother's band in local festivals, he had big dreams. Under his senior yearbook photo where he sports short, spiky hair, his plans are listed as being "a famous blues musician."

While trying to start his career, James moved to Fort Worth and played with bands of various genres — from bluegrass to heavy metal — and even performed solo for tips in coffee houses. His sang and played the guitar and mandolin on his mother Bybee D. "Debra" James' 2006 country and folk CD, "Cross That Line." His website says he formed The Casey James Band with his older brother and a drummer in 2008.

Bono Saunders, who runs the booking and management company Bono Entertainment, said he started lining up gigs for James in the Dallas and Fort Worth areas after hearing him play the acoustic guitar more than a year ago.

Saunders said he was impressed by James' range — seamlessly moving from a John Mayer song to a Merle Haggard tune — and his unique sound that he called funky and soulful with Texas roots.

"He was just hungry. I think he wanted to get out of a little town and do his thing," Saunders said. "He doesn't have any aspirations other than to play music, and it didn't matter how big or small the venue."

James brought audiences to their feet cheering after performing solo or with his band in biker bars andalternative rock clubs from Texas to Oklahoma, Saunders said. His good looks also made him a "chick magnet" but he always focused on the music, Saunders said.

"With his piercing blue eyes, he could look into an audience and draw them in," Saunders said. "I've seen that he's doing the same thing (on `American Idol'), looking into the camera and saying, `Here I am.'"