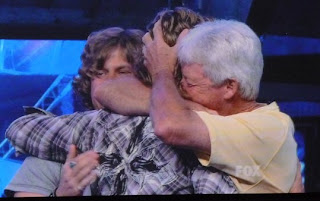 Photo courtesy of Jeanne Hopkins
Update:
It's been confirmed that Casey will be presented with the key to the City of Cool on Saturday morning at 10:00 at the community center. There will be no parade as originally reported. Be sure to be at Bulldog Stadium to hear Casey sing a couple of songs & say his thanks. The stadium will open at 9:00.
All of us past & present Millsap residents were on the edge of our seats last night waiting to hear what 3 contestants would take the top spots on AI. It's typical for Idol to drag out the results show by asking every major artist to perform, before they get to the good stuff. At just about the mid point Ryan announced that Casey earned his spot in the top 3 which means he's coming home! Not coming home to rest though... The show will have Casey busy making promotional stops all over north Texas to thank everyone & also to earn more votes for the following weeks. I'm sure that it will hit him big how things have changed once he gets in Texas. About 3 months ago Casey boarded a plane & headed to LA to show America why he should be in the top 24 on the hit talent show. He'll once again land in his home state this Friday but this time to find everyone looking & pointing "is that Casey James"? I certainly hope that besides dragging those kids to every red carpet event, that Idol has been trying to also prepare them how to deal with media, fans, fame etc. Here is the Friday schedule as posted on American Idol.com:

4-5p - Parade & performance in the Fort Worth Stockyards

Over the past week there have been rumors flying around about the possibility of Casey coming to Millsap High for his visits. We're hearing that a parade in Millsap & Cool will be Saturday from 10-11. No other details have been announced at this time. I will let you know when I find out. There is rain in the forecast this weekend...hope it doesn't rain on our parade!
I'm sure that all those other stops he'll make on Friday will not compare to seeing hometown folk line the narrow streets of FM 113.
Since the beginning I'v been doing a weekly Casey blog for the the locals & anyone who has been following the show. It's been very interesting to see how one of our own average Joe's has been given such an opportunity like this....& to make it this far. If you've followed, I've said from the start that Casey & Crystal will be in the finals. Lets make that happen. I've also made many references of how this reality show seems very "non reality" but I'll save that rant for another time. For now it's time to make sure my cameras are charged & see where I need to be Friday.
Congratulations to Casey & his family!
At about this point in the competition is when the contestants start claiming the top spots in the iTunes charts. Everyone log on & purchase all of Casey's studio recordings from this years show. Let's show everyone how the blues rock sound is cool!
at May 13, 2010