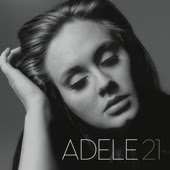 Grammy winning British pop-Soul powerhouse Adele released her sophomore album, 21, Tuesday in the U.S., and the reviews have been quite positive for the most part. Entertainment Weekly gave it a grade of A-, Spin magazine rated it an 8 on the 10 scale, Rolling Stone magazine gave it 3.5 stars out of a possible five and the Los Angeles Times gave it three out of a possible four stars.
Having purchased Adele's first release "19" a couple of year ago, I was definitely expecting great things from her follow up effort & was I impressed? You better believe it.  This record has a little bit of everything from toe tapping tunes like Rollin Deep & Rumor Has It, to a seemingly country sounding ballad called Don't You Remember.  The unmistakable throw back style of Adele on her sophomore album 21 is a must have. Click here to download from iTunes.   Official Web Site
Here's what critics are saying about 21:
In these times when everything on the radio seems to be electro-pop music, and a shameless use of the auto-tune machine is perpetrated by ‘top’ record producers, there’s an female artist, a Londoner, who still wants to create albums with real instruments, and show her voice as it is: pure, powerful, soulful, and able to pierce through you all the way to your heart with one simple note. Read More.......

I really like this track-by-track look at the album by Adele herself. It's interesting to hear from the artist first hand where the inspiration from each song comes from, even exactly what the songs mean to them personally.       I like her better having seen her personality more in this clip. Warning, she does cuss like a sailor!  LOL