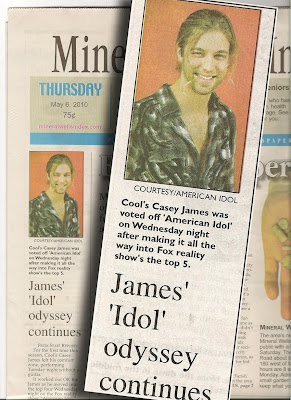 In yesterdays Mineral Wells Index the caption under Casey James' photo announced his status on the hit reality show. The only problem...it was incorrect. "Cool's Casey James was voted off American Idol on Wednesday night after making it all the way into Fox reality show's top 5". The story that followed the flub was correct though. Like many of us...I guess the editors were planning on his exit from Idol & had already written the headline & story. Like I mentioned the story inside was correct but just failed to change the wording under his photo. OOPS! The index has been good about keeping us informed on the latest. We all mess up....
Read the Index article.
Don't forget to go to iTunes to download Casey's studio version of "Blue Skies". Not my favorite style of music, but much better than his live performance.
at May 07, 2010